The Castle of Faneromeni

What catches the eye of the visitor during each tour of Korthi is the tall rock with the flat top.  140 stairs lead to the castle with ruined houses, the underground tanks and the church of the Assumption of the Virgin Mary (or Phaneromeni).  The view of the sea and the impressive surrounding landscapes is unlimited from every spot.

The castle of Faneromeni or Epano Castro (also known as Palaiokastro), once gave its name to the whole of Korthi.  It was constructed during the Middle Ages – although one can see traces of the old Roman fortification – on a large plateau and is a significant sample of the defensive architecture of that historical period.

Where ruins lie today, once stood a great and powerful medieval city.  It was surrounded by a 2 meters thick wall, large parts of which are preserved until today.

Many of the castle buildings were underground ones and you can only see them today because their rood has collapsed over the years.  Legend has it that the buildings could communicate with one another and that the residents of the castle had access to Melissa beach which is located below the castle, north of Tis Grias to Pidima. 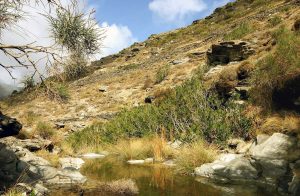 Dipotama extend over a length of 7klms. That is part of the pathway was considered as the main road that led from Chora to Korthi up until 1950. Since it stopped serving that purpose, its natural environment remained intact and fully emerged.
Upon entering Dipotama, the visitor is swept away into a small paradise full with running waters, vegetation, entwined pathways, waterfalls and stone bridges that date back to 1000 AD.

A wide and paved path goes through the canyon which is full of wild berries trees, oleander bushes and mulberry trees, fig and walnut trees. At the point where the canyon intersects the river, the visitor comes across an arched bridge. Many springs can be found through the canyon which serves also as a natural refuge for many animals. The central pathway is intersected with other smaller pathways filled with stairs that connect the villages of Korthi to the fields and watermills.

The pathway that leads from Chora to the Bay of Korthi starts as a small cobbled path from Paraporti, goes through Lydi beach, reaches Symonti or Syti as the locals prefer to call it and enters Dipotama. From there on it heads to the village of Kochilos and to the Bay of Korthi. A small detour just outside Kochilos, leads to the castle of Faneromeni. The total amount of time needed for one that wishes to take that route is 3.5 to 4 hours. 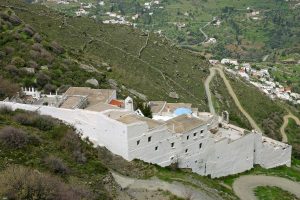 PANAHRANTOU. This monastery is built on the mountain of Gerakones (which was also called Shelter). It is first mentioned at the end of the 16th century and according to tradition (but not historically proven) it was founded by Nikiforos Fokas.It gained its great reputation during the 17th century and during the Greek Revolution and during its golden era, it had up to 300 monks.

The skull of St Panteleimon is kept in the church that holds his name and it is said that it smells of Myron. Its lodger has a wooden carved reredos which is considered to be one of the most beautiful on the island.

ST NIKOLAS MONASTERY. As you are driving from Apokia to Vourkoti through a non-paved road with barren landscapes, old pens, terraces and crop fields, you come across the monastery of St Nikolas.
This monastery was founded in the 11th century. It was abandoned and re-inhabited between 1450 and 1480. It is a large and rich building complex since it has many fertile acres in the surrounding area. It has bell towers, arches, monk cells and a reredos, which traditions says that it was built by craftsmen from the island of Chios. St Nikolas’s skull is being kept there as a religious relic and it is also said that the icon of the Virgin Mary makes the dried lilies that surround it, blossom once a year.

TAXIARCHIS MELIDAS.This monastery can be found on the way to Chora, 2.5 km after Stavropeda. It was built in the late 11th century and has 12th century fresco remains inside it. The cemetery of Pitrofou (the rural village that will come across your path soon after) is inside its enceinte.

An organized settlement seems to have existed on the island ever since the late Neolithic period (4500 – 3300 BC) at the area of Strofilas as well as in Mikrogiali and Vriokastro on the north side of the island. A primitive form of fortification of the Aegean has been detected in Strofila. Also one can find the oldest shrine and rock paintings depicting 4000 – 4500 year old ships, as well as compositions with fishes and deer, findings that are considered to be quite unique. At the end of the Neolithic era, the area was abandoned and its inhabitants moved to the area of Plaka. That settlement flourished during the middle of the Bronze Age.

The geometrical settlement of Ypsilis spreads over 60 acres and the wall that used to surround the citadel has been preserved in several places as well as the ruins of some of the settlement’s buildings. A temple dating back to the 6th century was discovered in the Acropolis and it was most likely devoted to the worshiping of the Goddess Dimitra and her daughter Persefoni.