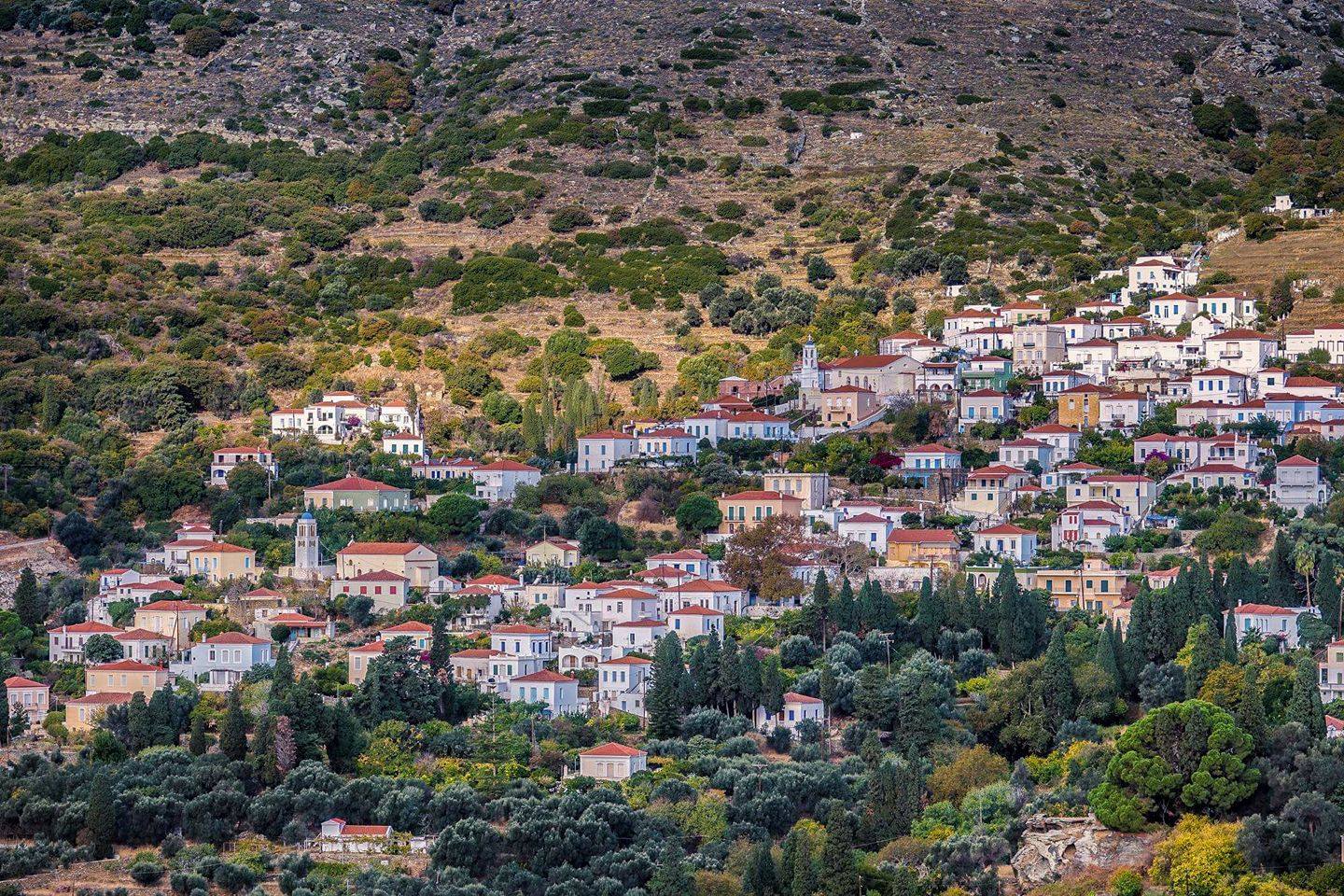 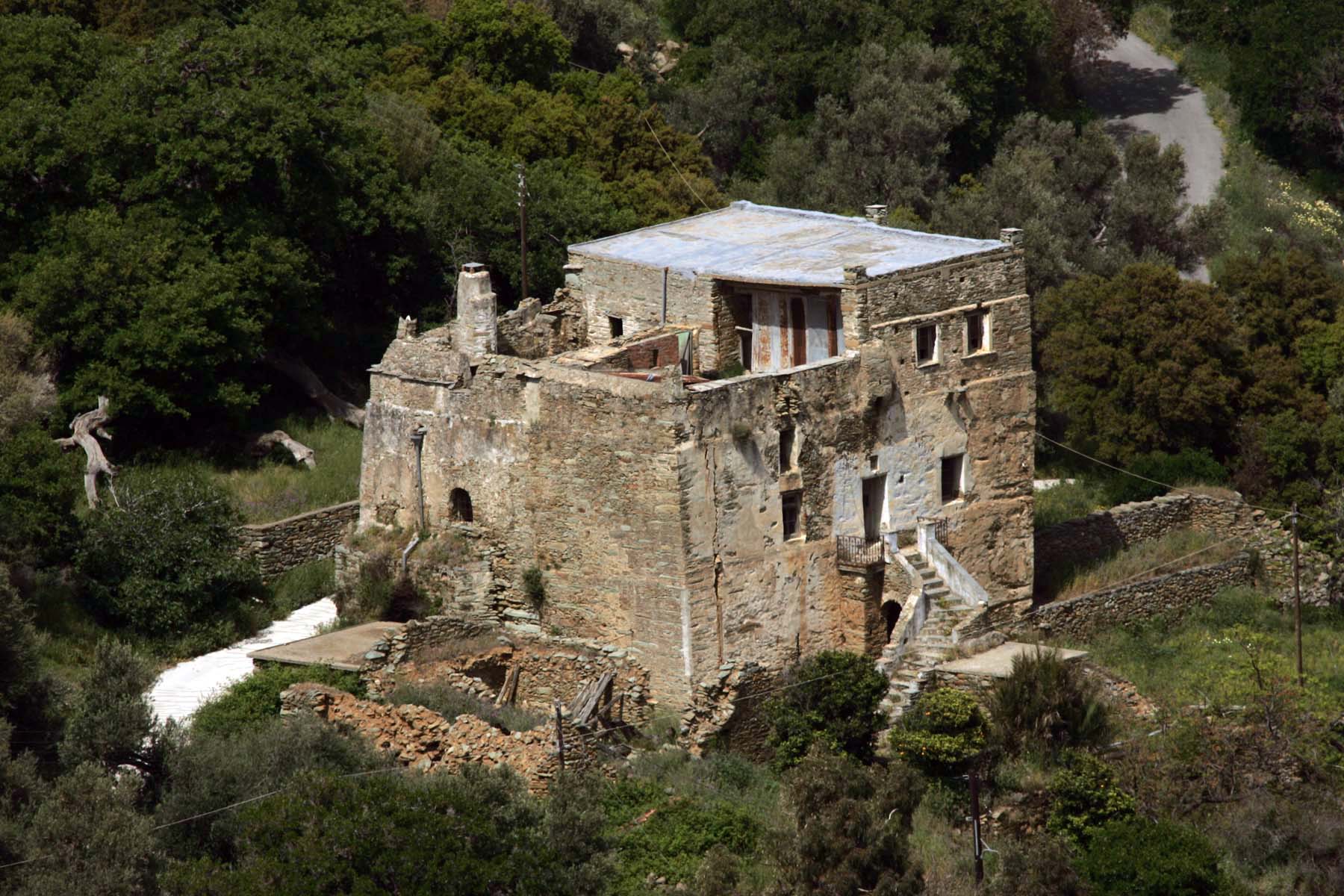 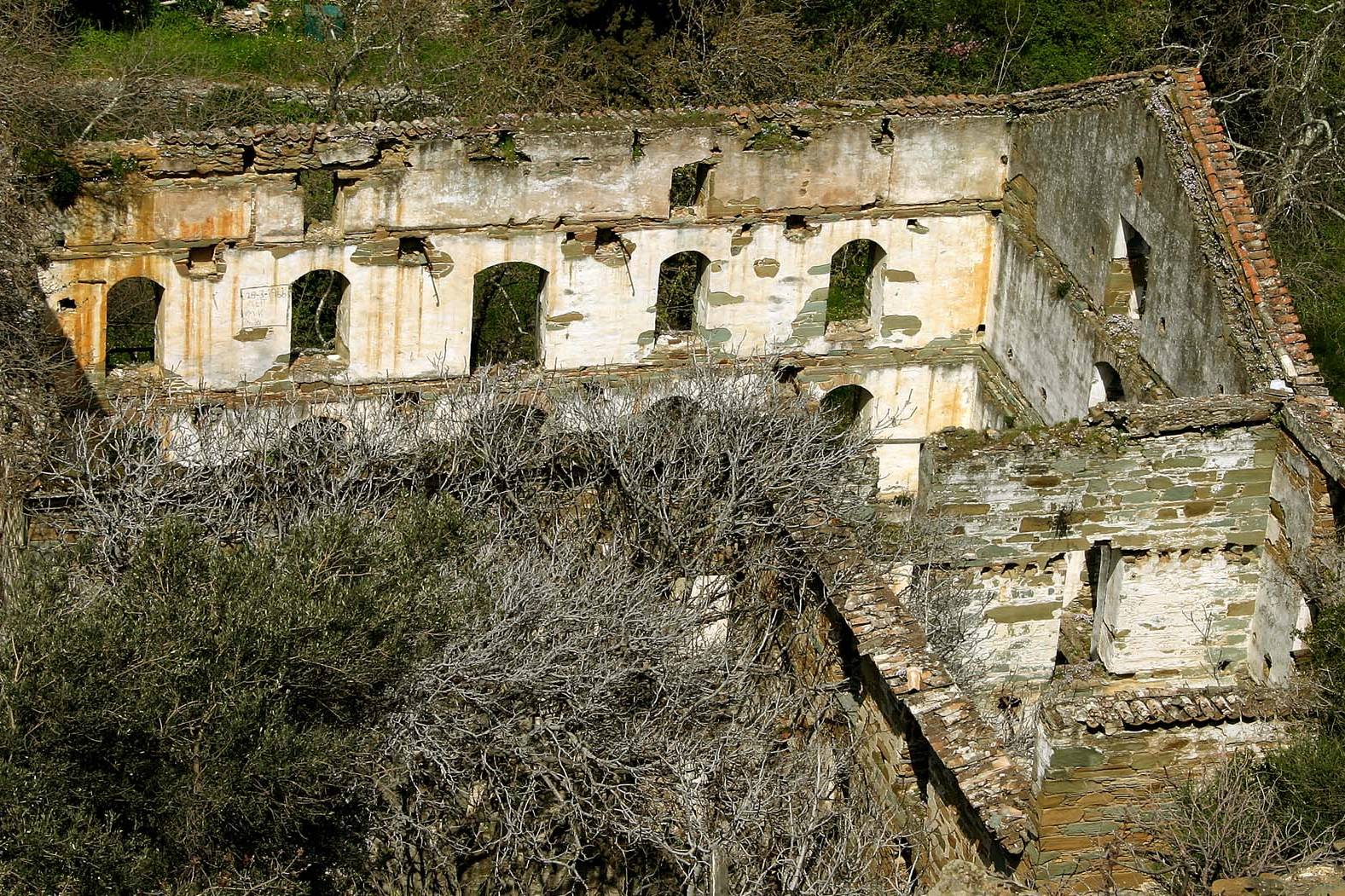 Upon entering the settlement of  Upper Stenies, the whispering sound of water from the stream tells stories about the women who lived alone for years  in the “village without men”. Captains and later on, shipowners were the owners of the large and beautiful houses built high due to the fear of pirates, and today they are letting their mansion facades bathe in the sun, among gardens, flowers, citrus, palm trees, jasmine and cypress trees.

The families of Embirikos, Goulandri, Polemi and Paleokrassa own houses here, and the Horaites and Stenioton rivalry was famous in the past.  Their main goal was to exceed one another into who would be the best student and who would become the best captain!

Stenies settlement lived its golden era in the 1950s during which lavish houses were built and equipped with admirable for the time electrical appliances that captains brought from abroad.

The village (divided into Upper and Lower Stenes) is very well taken care of. It has 1968 fountains, galleries with the names of donors, elementary school with a large courtyard, a square that was built in 1915 and renovated in 1953.

To navigate through it, you will climb many stairs, as it is built amphitheatrically on the slope, and you are most likely to get lost as it looks like a small labyrinth.

The main attraction of Lower Stenies is the stone bridge of Leontos and the Bistos-Mouvelas Tower, a solid rectangular building that is considered to have been built in the 17th century. It was mainly used by the locals when they wished to seek protection from the pirates.

From the nowadays abandoned Fabrica, the large pasta factory built by the Embirikos family in the 19th century in Stenies (you will see it right under the asphalt road leading to the Lower Stenies), only the outer walls remain, the iron impeller and some accessories of the milling system. It also used to have a large watermill and later on a mechanical steam mill. Embirikos ships brought raw materials from Romania, and the plant, along with one that existed in Niborio, was providing jobs for the people that remained on the island and did not choose the life of a sailor. The factory was in production up until the war.

Only 1 km away from Messaria, lies the beautiful settlement of Lamira, filled with villas, olive groves, cypress trees and bougainvillea plants – others exposed to a common view and others hidden behind high stone walls. Walking through the cobbled path called Ioannou and Irene Yalouris, you pass by the marble fountain with the lion and continue towards the square with the plane trees and the All girls’ school which was built in 1962. Going down from here you will come across the old fountain of K. Embirikos, built in 1840 and then you will take a look of the wonderful  view of Chora since you will be in a higher altitude.

The fishing village, which had only 30 houses during the 1960s, was over-developed in the 1980s and 1990s. Nowadays it nostalgically looks back to the days where even the rooftops of its houses were up for rent! It remains, however, alongside Gavrio, the settlement with the most tourist traffic – especially during in the evening.  You can find Taverns, cafes, bars, clubs, pizzerias – along its coastal road and the alleys that end up to it.

You can discover the beauties of the old Batsi as seen in the 1960’s movie “Girls in the Sun” if you go walking in the uphill alleys that lead to Piso Vrisi, where fairies used to live as the elderly locals believe and in Ano Batsi. Today approximately 600 people live here permanently. Few of the shops remain open during wintertime.

A classic harbor Cycladic harbor that  was developed in the early 70’s, when the ferry routes to Chora stopped. There are many shops on the coastal road, many of which are open during wintertime as well. Above the harbor there is the large church of Agios Nikolaos and the primary school.

The ships arriving from Chora used to set anchor in this old shipyard.  Nowadays it is mainly a family oriented tourism resort and the only spot in the area of Korthi where one can stay, eat and have a drink in evening.  The settlement, which was built between the 19th and the 20th century, consists of some old houses along its coastal line, a small port for boats and at the end of its coastal line one can come across the chapel of St Catherine.

On the parallel road of the coastal road, one can find the central square which is called Heroes square, the elementary school, the nautical club and the folklore museum.

On the way to the village of Apoikia, the visitor will be impressed by the plane trees and the running water that can be seen all around.  Just before the first houses of the settlement appear, a small sign indicates the location of the Pithara Pond and its waterfall which is truly worth visiting.  Upon stopping in Apoikia, you can drink fresh water from the stone built spring.  Close by one can find the factory where the “Source of Sariza” water is being bottled while the steeple of Panagia Katasirti can be seen a bit further along the way.

The settlement is built both on the left and right side of the main road (Ano and Kato Palaiopoli) in a vast green area.  Ano Palaiopoli is the place where one can find the church of St John the Baptist and from that point and on can walk to the waterfall that is located on the slope.  Kato Palaiopoli has quite a few beautiful houses in its green paths that lead to the beach and the archaeological site.  From the top one can spot the ancient jetty in the water.

Palaiopolis remained the island’s capital for 12 centuries (6th BC – 6th AD).  The settlement developed mostly in the middle of the the 8th century BC, during which the inhabitants of Zagora and Ypsili villages decided to leave the rural life and move in larger centers.  The ancient settlement was discovered in the 19th century and the first excavation was made by the famous town planner, Kleanthis.  In 1832 the statue of Hermes of Andros was discovered along with a feminine statue of the “Great Herculeiotissa” type which has been a permanent exhibit at the Archaeological Museum of Chora ever since 1981. The second excavation in Palaiopoli was conducted in 1956 by the archaeologist Nikolaos Kontoleon and managed to bring to light the city’s market which was located on the beach and a large building with a series of dedicational statues in its façade.  Systematic research in the area began in 1985.  One can come across archeological findings at the Archaeological Collection of Palaiopolis (tel. 22820 41985) which holds three different wings for the findings, statues and inscriptions.

The beautiful village of Kochilou is built near the castle of Faneromeni and is one of the highest built villages of Korthi and has an impressive view of the bay.  The tiled roof tops of the village houses are sign of urbanization (one can observe something similar in Stenies and Synthi).  Tiles were added to the Cycladic houses in the beginning of the 20th century.  Kochilou was also a naval village.